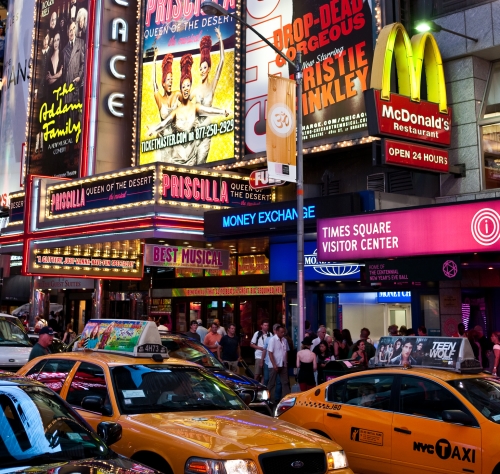 Rebellato introduces the different meanings given to the word “globalization” as pertaining to the fields of consciousness, culture, conflict, politics and money. He then prefers to use the word only in terms of “globalized economy” while opting for the term “cosmopolitanism”[2] when referring to culture, politics, etc.  The reason is that he believes that different forces have contributed to the worldwide spread of cultural and political phenomena through human history, while global economy is a more recent phenomenon, often contrasted by cosmopolitanism.

After a brief digression explaining how Karl Marx’s analysis of capitalism perfectly applies to the present state of things, Rebellato mentions some significant theatrical works that have questioned capitalism and globalization in the last two centuries. The author himself believes quite firmly that global economy has undermined equality and sustainability.

Rebellato points out that McTheatre[3] (musicals like Cats, reproduced worldwide with the same standards as the original one) is the only form of theatre that has been affected by global economy. Otherwise, theatre, with its unique performances, is the perfect example of artisanship. Two alternatives to globalization seem possible to Rebellato: localization and cosmopolitanism. Localization means creating works in the community and related to it in such a way that they would mean nothing to an external audience. Rebellato explains why this approach is regressive and contradictory. The only good alternative is cosmopolitanism and its equal respect for every human being. Cosmopolitanism is not to be confused with uniformity, which usually implies an adaptation to the western world.

The book shows how theatre is per se a form of art based on the ability to represent and participate in other people’s stories while sharing the enjoyment of the performance with the rest of the audience. The author concludes that “theatre’s formal modes tend towards cosmopolitanism” (75) and mentions examples of theatrical representations that head in that direction: the theatre of the absurd, the de-territorializing of the setting, the metaphorical use of objects on the stage.

For the sake of brevity, Rebellato does not go deep into some of the topics he analyses. The chapters concerning the pros and cons of globalization will not have much new to offer many of the readers. This is clearly an introduction to further considerations that he needs to make when dealing with theatre in particular. His ideas are clear and the examples meaningful when he gets to the topic of how theatre reacts and responds to globalization. When advocating cosmopolitanism he is very convincing, as well as when showing how deeply different universalism[4] is from the uniformity to which global economy tends in the name of profit. Interestingly, he seems to say that the solution is to be found in the “gap” between the play and its production, which gives space to creativity, avoids standardization and thus keeps the soul of the play alive. This seems one of the strong points of the book. Rebellato also gives us food for thought when he distinguishes between the a priori principles and principles based on aims like profit. His position is to reject what may seem good but is done with non-ethical intentions.

Theatre & Globalization offers a good starting point for students approaching the topic and gives useful examples and suggestions for further analysis and reading.