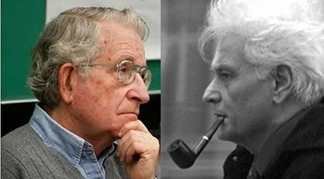 I name no names. But how sad it seems, in this burgeoning Irish spring, that the linguists of today, those who deal at depth with the apparent structure of language, have not taken cognizance of the influential position that language has attained in the house of philosophy during the latter half of the twentieth century. I think there are two main reasons for my wishing this to be otherwise, both relating to the same lost opportunity. The first is the lamentable failure among the linguists to take the philosophical turn into their studies, which might have helped them to separate the chaff more readily from the grain; while equally lamentably the philosophers have failed to build on a clear understanding of the structure of  language and thus the nature of its presence in and for the structure of the world.

These two failed opportunities are recursive upon each other. The failure of the linguists to separate the chaff from the grain has deprived the philosophers of quality linguistic input; this in turn (in the perception of the linguists) has resulted in a failure by the philosophers to apply a satisfactory understanding of language to their philosophical enquiry; which again has dissuaded the linguists from taking account of the philosophical perspective which would have been of great value to them in their neglected task of separating the said chaff from the said grain. Cripes, as Fortinbras said, what a mess.

Of course there have, here and there, been linguists among the philosophers, and philosophers among the linguists, but somehow they have not caught on. From the viewpoint of either camp it seems that the greater fault lies with the other.

This stand-off is further clouded by the existence of another academic rift, this time perhaps even more intestine, between the linguistics and literature departments in our Western universities. There is an abysmal lack of linguistic understanding among the literature staff, whose linguistics is often notional, cosmetic, and riddled with prejudice, so much so that their quasi-linguistic pronouncements can seriously interfere with the educational work of the linguists upon the same students. But it’s a brave linguist indeed who can tell his class that what his colleague Professor Noddy has told them in passing about accents and dialects is racist and muddle-headed; instead he hedges his remarks and muddies his own waters. On the other hand there is a no less abysmal lack of literary knowledge on the part of the linguists, who insist on concentrating on Mary’s giving John a cake and ignoring the up so floating many bells down which might galvanise their algorithms into some sort of fertile movement (for references, please google).

Yet while this is going on the philosophers and the literary theorists are occasionally on good terms, so much so that they are sometimes indistinguishable one from the other.  And this confirms the philosophers’ view of language as a mainly literary undertaking, which is perhaps a defendable stance, but one which the linguists reject as metaphysical, at least while the literary teachers continue to talk claptrap about accents and dialects (to name a few). It seems that nobody has really got hold of the right end of the stick. Perhaps I ought to write something about it.